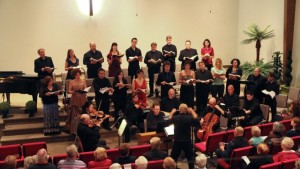 Arcady is an ensemble dedicated to the recording and performance of early music and the music of Ronald Beckett. The ensemble has performed three operas and produced three CDs of the Beckett’s works. The organization combines outstanding young Canadian performers with established professional instrumentalists and singers. The ensemble has also established a reputation for its energetic and imaginative performances of early music and is the regular chorus for Boris Brott’s National Academy Orchestra of Canada.

Founded and directed by Beckett, Arcady offers 25 and 30 performances in Southwestern Ontario each year. It offers to its presenters a variety of programs ranging from small recital programs to full scale choral-orchestral concerts.

The majority of Arcady’s performances are based on its five CDs: A Baroque Messiah (1999), Welcome Yule! (2001), A Beckett Miscellany (2002) and Beckett’s opera Ruth (2007). It also produced a popular Christmas CD for Ruby Productions (Peace on Earth – 2000). Arcady recordings have received extensive radio play on classical stations in North America and Europe.